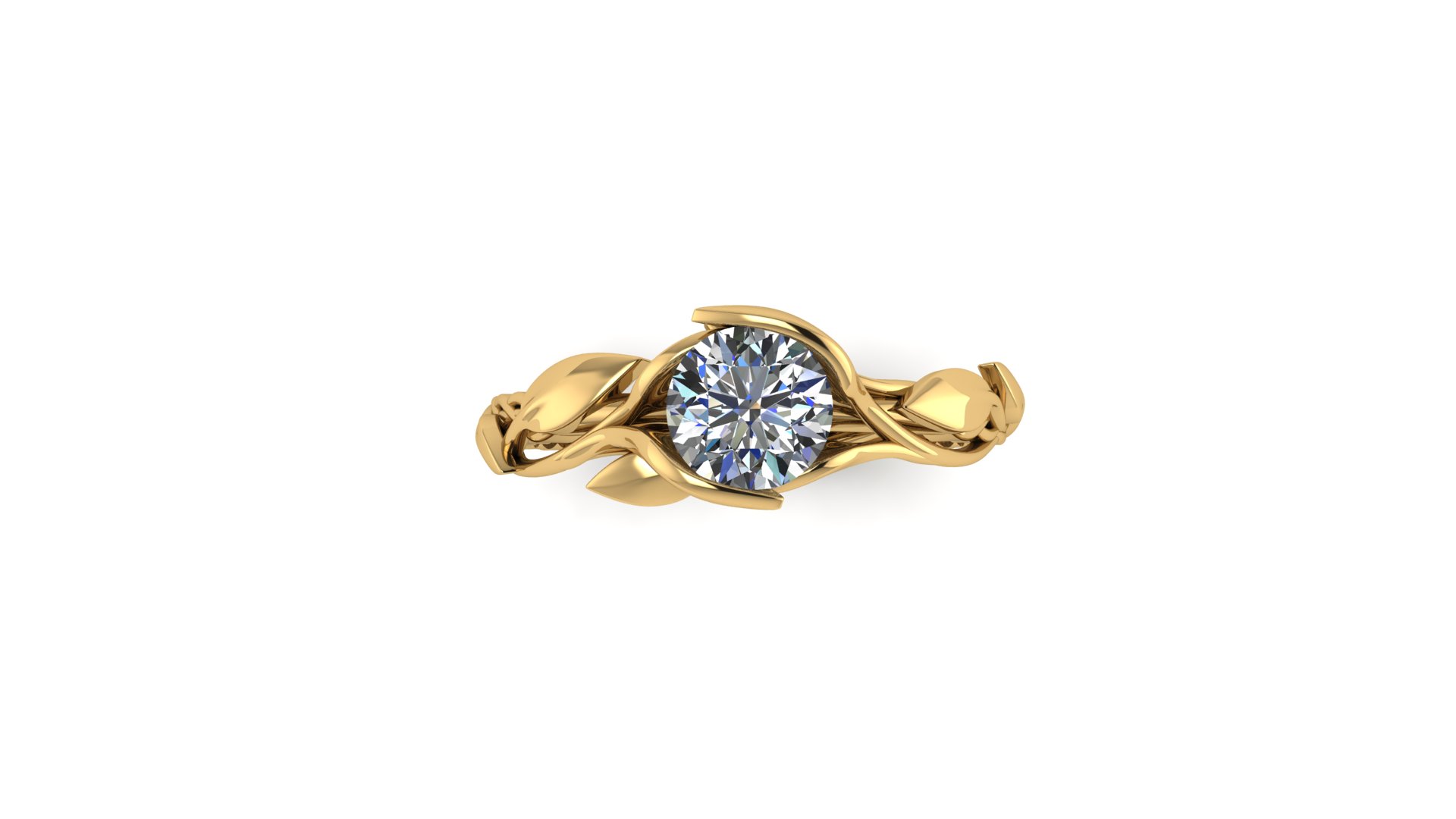 What Does Solitaire Mean?

Solitaire means alone, single, or by itself. In the jewelry world, this ubiquitous term refers to rings set with a single diamond or gemstone.

Additionally, the term applies to earrings and pendants that only have a single stone.  Most people associate a solitaire diamond with the classic and most popular

Making it a little confusing for some is the alternative Solitaire definition that refers to a card game played by one’s self that dates back to the mid 1700’s.  We are not

talking about a game you can play on your phone or Ipad!

Many of our customers who are new to buying jewelry ask which solitaire styles are the most popular style for brides to be. For decades, the ever present Tiffany

Engagement Ring has been the standard go to for those wanting a solitaire engagement ring. It is a simple, timeless, and elegant ring setting, so it is no wonder why it is so

popular.  Historically, these rings have had a natural diamond as the focus of the ring. However, lab diamonds, moissanite, and colored gemstones have become

Another reason lab diamonds have become popular is the price.  Buyers can achieve the impact of a 2 or 3 carat at a fraction of the cost of a natural diamond.

The Most Popular Engagement Ring Style 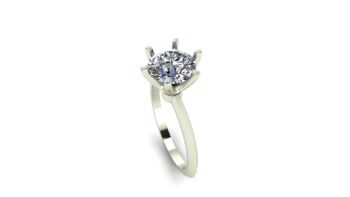 This is a 6 prong Tiffany style solitaire engagement ring.  4 prong settings are also very common on smaller stones as they show more of the stone than a 6 prong setting. Click on the image to see more pictures.

To be sure, Tiffany revolutionized the jewelry world with the creation of this type of setting. They also made Platinum engagement ring popular despite toe added cost. Set

with a single diamond, a Platinum solitaire provides the most secure setting for your center stone.  It provides more strength to hold a diamond than a gold ring does,

which is a major selling point to those wanting more expensive center stones.

When most think of a Tiffany style solitaire engagement ring, they think of a ring with a  round diamond.  However, these rings can be made with any shape stone.  After

the round brilliant cut, the square Princess cut is the second most popular diamond cut for solitaire rings.

Round – The round brilliant cut is the most common round diamond cut. This design is what people imaging when asked what an engagement ring looks like.

Princess – Square princess cut . The second most popular cut, the square Princess cut was created in 1979 and features over 70 facets, which is more than the 53 and round

Emerald-Cut – Rectangular step-cut . Emerald cuts are not faceted like a round brilliant or princess and are cut for fire rather than brilliance.  Because of this, these stones

need to have a higher clarity and better polish than the brilliant or princess cuts.

Oval – Similar to the round but typically 1.5 times longer. Oval cuts do not have the demand that a round does, so prices are lower, making them an excellent option for those on a budget.

Marquise – These are shaped like a canoe and have pointed ends. Not as popular as they once were 30 years ago, marquise cuts have an elongated shape that lends itself to

Heart – These are harder to find and can demand a premium in terms of price. They are also a more specialized cut that does not appeal to everyone.  Nevertheless, they

are still popular with some. 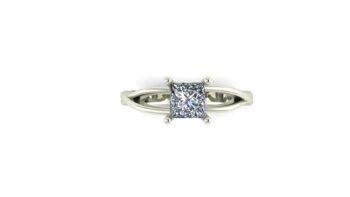 Here is a princess cut solitaire engagement ring.  However, we have played with the shank here.  Instead of the solid band, we have split the shank into two pieces and crossed them over each other.  Click the image to see more pictures.

What Makes The Solitaire Diamond Ring So Popular?

On top of Tiffany creating their revolutionary new solitaire setting, DeBeers was also responsible for the popularity of the setting,  creating one of the most popular and effective advertising crusades ever seen in the jewelry industry.

DeBeers was looking for a way to cement the diamond engagement ring as a necessity for newlyweds after WWII.  The United States was booming and couples had more

money to spend on things like diamond rings. With a stroke of genius, the phrase “Diamonds are Forever” was created as a way to market diamonds rings.  Consequently,

the solitaire diamond engagement ring and diamonds in general because highly fashionable. And with philanthropy in mind, DeBeers even created the idea that 3 months

salary was the proper amount to spend on a diamond engagement ring.  They even created the idea of the man proposing on one knee, which because the de facto standard

way to propose. As a result, the solitaire ring became an iconic symbol of romance. 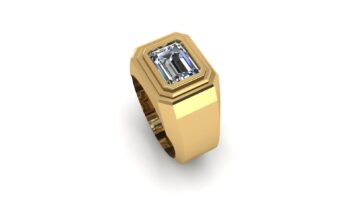 Solitaire rings are not only for women.  Here is our double bezel men’s wedding ring with a single emerald cut diamond.  Click on the image for more pictures.

Is It Possible To Buy a Solitaire Setting Without The Stone?

Many couples already have a stone they would like used in their solitaire engagement rings. They could have been handed a stone down from a family member or just

found a really good deal on a used stone. Consequently, we make solitaire settings for an existing stone all the time.  It is a great way to honor your family and can save ring

buyers a lot of money as well.

What Specifications Should Your Diamond Have?

The four traits of a diamond that drive the price are referred to as the 4 C’s. They include color, clarity, cut and carat weight.

The value of a diamond is derived from the combination of all four factors. The mix of carat weight, color, clarity and cut gives a diamond its value. Generally, the carat

weight has the largest effect on price.  Next is the clarity, then color and then cut.  But that isn’t always the case.  The best approach to take to finding the center stone for

your ring or to look at diamonds with different specs.  Personal preference is king here as some people prefer color over a better cut or want size of clarity.  The only way to

decide what is important to you is to see what the different colors, cuts, and clarities look like.

What Is The Origin Of Your Diamond And Ring?

In the past, ring buyers did not question where the materials that went into making a ring originated. However, social and environmental awareness of the impact of

diamond mining has grown exponentially in the last decade.

For example, many ring buyers prefer stones from Canada because there is no child labor exploitation like in other mines across the globe. Canadian mines also have to satisfy environmental requirements in their mines that do not exist in African diamond mines.  These stones command a premium because of this, but many are happy to pay the additional cost to know their diamonds was mined responsibly.

Then, there is the metal your stone will be set in. The most common are platinum and the various colors of gold.  Our ethical metals options include Fairtrade Gold if you

are are worried about where your metal is mined. Fairtrade Gold comes from Fairtrade certified mines. Those mines are owned by smaller companies that receive a fair

price for the gold they mine. Additionally, they receive a premium over the spot price to spend on things that make their community a better place to live. These include

hospitals, school, and wells that provide clean drinking water. Both designations are independently audited to ensure that they are providing sustainably and ethically

sourced diamonds and metals.  Unfortunately, there is no similar entity designating colored gems as ethically sourced, but sometimes you can find stones whose

provenance can be traced to a particular mine.

GIVE US A SHOT!

Are you someone who likes to have unique things? How does one differentiate themselves when the malls and chain stores all have similar designs?? The answer lies in

having a custom engagement ring created just for you. We will help you to create one from scratch if that is what it takes to make your dream a reality. Instead of going for

mass produced pieces, we can help you transform your own idea into a stunning custom jewelry creation.

While custom solitaire engagement rings are one of our specialties, we don’t limit ourselves to that! Regardless of whether it is a halo ring, split shank ring, or cathedral engagement ring, we can make anything.

creations, or to contact us about Custom wedding rings. It can cost less than you think to have your very own custom engagement ring made. Why settle for boring,

Send us the design you want and we will bring it to life.

What Does Solitaire Mean?